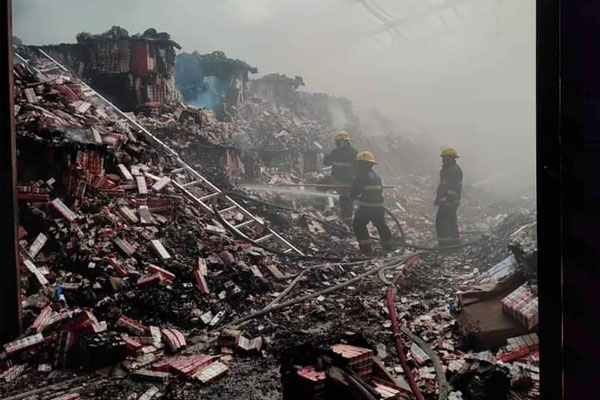 Acrid smoke blanketed a part of Marikina City on Thursday, Sept. 8, following a fire that hit a cigarette warehouse at dawn, prompting the Marikina City local government to advise residents and the general public to stay indoors, according to a report by Manila Bulletin.

The cigarette warehouse that was hit by a fire is located at 1049 JP Rizal St. in Barangay Nangka, Marikina City.

“Maaaring makasama ito sa kalusugan kaya kung wala namang importanteng gagawin ay pinapayuhan po na manatili na lamang sa loob ng bahay (If you do not have anything important to do, we advise you to remain in your homes since [the smoke} may be detrimental to your health),” said the statement released by the city’s Public Information Office (PIO).

According to the Bureau of Fire Protection (BFP), the fire reached the first alarm at 2:51 a.m.

However, the local government said the surrounding area remains covered with smoke.

The BFP continues to conduct moping operations in the warehouse.

In a statement, Philip Morris Fortune Tobacco Corporation (PMFTC), the owner of the sub-warehouse, said no one was hurt in the fire, and “all employees are accounted for.”

“The fire in one of the compartments of our Marikina sub-warehouse has been declared under control. Firemen were immediately on site to contain the fire. We are cooperating with authorities on the cause and extent of damage to property,” the PMFTC statement said.

The cause and origin of the fire are under investigation by the BFP in cooperation with the PMFTC.

The estimated damage to property has not yet been determined.