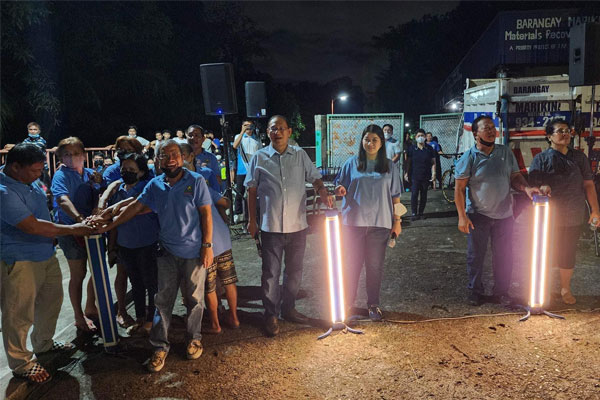 Marikina City Mayor Marcelino “Marcy” Teodoro illuminated the streets and alleys of Barangay Marikina Heights, Marikina City in a lighting ceremony for two consecutive days on Nov. 10 and Nov. 11, according to a report by Manila Bulletin.

Along with Mayor Teodoro was his wife and District 2 Congresswoman Marjorie Ann “Maan” Teodoro, as well as Barangay Captain of Marikina Heights Greg Punzalan and other local government officials.

The city officials first held the ceremony at Ipil Street and Dao Street on Thursday evening.

On Friday night, they switched on the lights in Park 23 and 24, consisting of the streets of Champagnat, Apitong, and Tanguile.

Many residents of these areas joined the Teodoros to witness the ceremony. They were also able to converse with the mayor afterwards.

Through the project dubbed as “Ilaw ng Pag-asa,” or Light of Hope, the local government aims to make the conduct of activities in these areas and the vicinity of their residences convenient and accessible.

Due to the passage of time, many street light bulbs have worn out, dimmed the lights they emit, and are in need of replacement.

Well-lit and functional light posts on streets will also help provide a stronger sense of safety for the people.